Warning: Use of undefined constant GFCI_MEMBER_WIDGET - assumed 'GFCI_MEMBER_WIDGET' (this will throw an Error in a future version of PHP) in /homepages/46/d106109878/htdocs/wp-content/plugins/google-friend-connect-integration/gfcintegration.php on line 26

Warning: Use of undefined constant GFCI_LOGIN_WIDGET - assumed 'GFCI_LOGIN_WIDGET' (this will throw an Error in a future version of PHP) in /homepages/46/d106109878/htdocs/wp-content/plugins/google-friend-connect-integration/gfcintegration.php on line 27

Warning: "continue" targeting switch is equivalent to "break". Did you mean to use "continue 2"? in /homepages/46/d106109878/htdocs/wp-content/themes/suffusion/functions/media.php on line 666

Warning: "continue" targeting switch is equivalent to "break". Did you mean to use "continue 2"? in /homepages/46/d106109878/htdocs/wp-content/themes/suffusion/functions/media.php on line 671

Warning: "continue" targeting switch is equivalent to "break". Did you mean to use "continue 2"? in /homepages/46/d106109878/htdocs/wp-content/themes/suffusion/functions/media.php on line 684

Warning: "continue" targeting switch is equivalent to "break". Did you mean to use "continue 2"? in /homepages/46/d106109878/htdocs/wp-content/themes/suffusion/functions/media.php on line 689

Warning: "continue" targeting switch is equivalent to "break". Did you mean to use "continue 2"? in /homepages/46/d106109878/htdocs/wp-content/themes/suffusion/functions/media.php on line 694
 Mayor Ravenstahl's Snow Job - Kang vs. Kodos 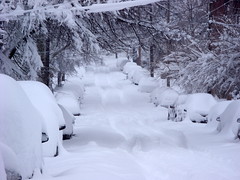 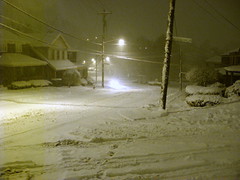 As my wife and I boarded a PAT bus in Oakland around 4:45 PM the snow was already falling heavily, and the roads were showing hints of ugliness to come. By thetime we were leaving our sons’ daycare on Murray Ave around 5:15PM, the roads in Squirrel Hill were definitely getting bad. That night, around 9PM, we went for a walk. The neighborhood was peaceful and quiet, and the falling snow was beautiful.

We didn’t see a single plow in all that time.

What we saw upon waking the next day was incredible. Our street in Greenfield was covered with at least a foot of snow. Pics from around my house can be found at my Flickr account.

We didn’t see a plow on our street until late Monday afternoon. As this P-G article points out, we weren’t alone in being snowed in and annoyed about it. A number of citizens using the #snOMGpgh tag “bellyached” on Twitter about the state of their neighborhood streets. To note only that would miss the bigger problem, though. Impassable side streets are just collateral damage from more fundamentally bad decision making.

Hizzoner has  protested that criticisms of snow response just aren’t fair. After all, when he left for his birthday party, how could he have known that the storm would be so bad? And once the snow was on the ground, how could he be blamed for the justifiable difficulties in moving so snow from the roads?

He’s partially right about what to do after the fact. You can’t just push around that much snow; it has to go somewhere, and that takes time and equipment. Those of us on secondary or tertiary roads shouldn’t be too surprised that we weren’t plowed out, as annoying as that was. What about primary roads, though?

“And here I was thinking Forbes and Fifth were main roads. Silly me!” – Carriechiz

Is there really any good reason for main roads to still be a mess? Four days out from the storm? With the National Guard in town to help? With private contractors hired to provide additional equipment?

I don’t think so.

Nor do I think most of this nonsense had to happen in the first place. One simple decision might have saved us a lot of headaches. Somebody in city government should have been keeping track of the storm as it developed. When it became apparent that 8″ was to be the minimum rather than the maximum accumulation, trucks should have been mobilized. If plows had been working throughout the night, primary and possibly secondary roads would never have accumulated a foot of transportation-stopping snow.

If Hizzoner would like to suggest that even if plowing had begun before the storm had ended there wouldn’t have been enough plows to make much of an difference, I’d like to remind him of this:

“With the city fielding more than 1,000 calls about unplowed streets this week, Mayor Luke Ravenstahl intends to pull out all the stops — and a few more snow plows as well — to make sure it doesn’t happen again.

“An admittedly frustrated and upset mayor said yesterday that city workers will inventory all public works vehicles to see if some, including garbage trucks, could have snowplows mounted on them to help clear streets.

“Then, by next winter, Mr. Ravenstahl wants an automated snow removal routing system in place to determine the most efficient way to use the fleet…”

How’s that war working out for you, Mr. Mayor? Mission accomplished? I guess we should just consider the National Guard’s help in digging us out as a surge.

P.S. The article that mentioned my Twitter was actually my second fifteen minutes of P-G. Here’s my first – in case anyone cares. 😉